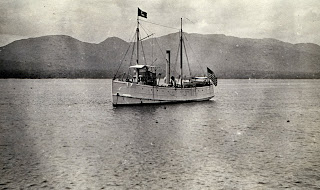 In 1893, Captain John Irving of the Canadian Pacific Navigation Company built three boats for his company. The Steamer Tees was built in Stockton-on-Tees in England, and she plied the Inside Passage for 44 years bringing thousands of gold seekers and others to Skagway and Dyea. The Tees was a modern steel hulled, double bottomed freighter with a triple expansion engine, a siren whistle and electric lights. Her top speed was 10 1/2 knots and at 165 feet, had cabin space for 75 people. She came to the west coast in April of 1896 and despite going aground once in 1899, made hundreds of trips north to Alaska. After being acquired by the CPR in 1903 she continued to ply the rough waters off of the rocky coast of Vancouver Island for 10 years. In 1918 she was sent with a crew of divers to salvage the safe off of the Princess Sofia. The safe with $62,000 of bullion was recovered but the Sophia was not able to be salvaged.
Late in life, in the 1930’s she became a tow boat towing scows laden with hog fuel from the Chemainus Sawmills to Port Angeles. In 1937 while towing a barge into Victoria Harbor on a stormy day she was struck by the barge and destroyed.

The ghost of Fannie Hall, a Gold Rush actress who was murdered on the ship in January of 1900 must have gone down with the ship in Victoria Harbor.
The photo above is not the Steamer Tees but is similar. 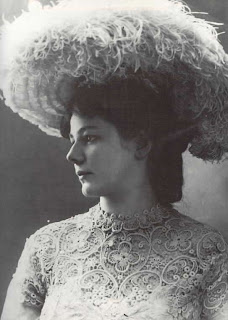