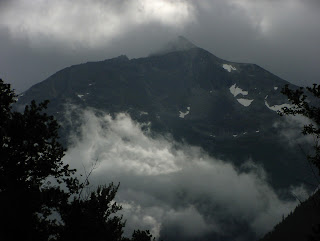 Very often people ask how they can get to Whitehorse from Skagway and we tell them that there is a bus in the summer, but the road is the only way (the train only runs to Carcross in the summer). It would seem to be a simple thing to fly over the pass and on to Whitehorse, just 110 miles away. However, several pilots have found that the pass is deadly and unforgiving. While it seems to be clear when they take off, once at 3400 feet the fog becomes so thick you cannot see, even on the road. And so that is what happened on this day, January 30, 1935 when Lawrence William Muehleisen, (see earlier blog) the pilot aged 28, and his three passengers hit the side of the mountain. Charles C. Larsen, aged 44, John R. Muralt and Archie King, a White Pass employee, were the other three men who died. Muehleisen and Larsen are buried in the Pioneer Cemetery here in Skagway.

I talked to one old timer recently who said that at the time of this crash, people said that they suspected White Pass of sabotaging the gas tank on this plane because it threatened to undermine the train’s profits. An interesting comment…..