When Alaska was purchased in 1867 the prohibition of alcohol was extended from the lower 48 where liquor was prohibited from areas inhabited by Native Americans. In the Spring of 1898 however, a bill was introduced to Governor Brady to suspend the law since it was, by and large ignored anyway. Certainly the dozens of bars in Skagway attested to that. I have already blogged on the alcohol issue which is quite extensive, but I was more interested in the use of drugs in Skagway during the gold rush.

I just went through my database and counted about 30 druggists and owners of drug stores here in the gold rush. I never really thought about that until an article in the New Yorker described the use of opium, cocaine and marijuana at the turn of the century as legal. We’ve all heard the story of how Coca-cola actually had real cocaine in it which gave a real high. Morphine was commonly prescribed for all kind of ailments and apparently so was marijuana. In some cities, such as San Francisco, the many opium dens became such a problem that citizen vigilantes attempted to drive them out, or at least underground. Seen above is such a group in San Francisco.

Certainly there was opium here, or at least morphine, as I have a note that Syd Dixon, an accomplice of Soapy was an opium addict. Did the druggists in town regularly prescribe these? Here is a photo of an opium container and an advertisement from New York from that time.

Intoxicants & opium in all lands and times, p. 163, By Wilbur Fisk Crafts; 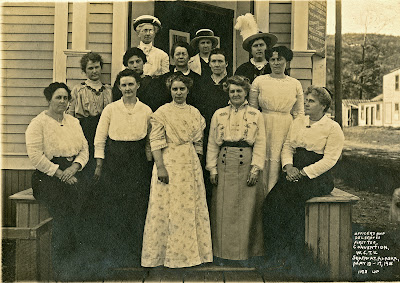