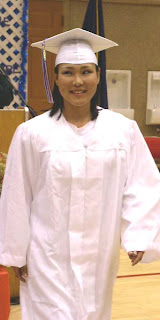 Harry, or Henry Schofield was born in 1857 in Germany and came to America in 1892. He came to Skagway from San Francisco and worked variously as a longshoreman, a seaman, and a fisherman. He got into trouble in 1900 when he sold liquor to the local Natives, and was found guilty by Judge Sehlbrede. He apparently had a liking for alcohol and on this day, November 26, 1903 died at the age of 46 here in Skagway from heart failure due to alcoholism. He is buried in the Gold Rush Cemetery.
In 2008 almost 12% of the deaths among American Indians and Alaska Natives are alcohol-related, more than three times the percentage in the general population, a federal report said. In our small community we know of one young local Alaska Native person who died from a drug and alcohol overdose a few years ago. She is buried in the Skagway “New” Cemetery on Dyea road. She is seen above at her graduation from Skagway high school in 2003.