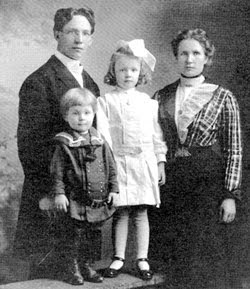 Mr. Rasmuson was born on this day, April 5, 1882 in Denmark. He came to Alaska as a missionary around 1904 and was married to Jenny Olson in 1905 in Sitka. His son Elmer described his father, Edward Rasmuson, as a learned, disciplined man who kept his personal diary in Greek, who learned law and banking through correspondence courses.

After 10 years in Alaska, Edward and Jenny Rasmuson moved their family to Minneapolis, where several of his relatives from Sweden had settled. He passed the bar there, but his wife, Jenny, wanted to return to Alaska, so the family moved to Juneau in 1915.

E.A. soon discovered there were too many lawyers in Juneau to make a good living, so he took a magistrate’s job in Skagway.

It was 1916 when they arrived and Skagway had fallen into the doldrums of a post-Gold Rush bust. The originals of the western-style buildings that tourists now visit were boarded up, and the economy was dependent on the vagaries of the railroad business. The memory of Soapy Smith was still fresh, and Elmer remembered “Ma Pullin” riding Soapy’s white horse in parades. The family remained deeply religious, and much of life revolved around the Presbyterian Church.

Because E.A. was the only lawyer in town, it was natural for him to become the attorney for the new Bank of Alaska, founded in 1916 by a group of New York financiers. It wasn’t much of an edifice — four walls and usually two employees. Edward became a Commissioner in 1917-18 and the President of the Bank of Alaska in 1923. He lived in Skagway from 1916 to 1943. Today the Rasmuson Foundation does many good things for Alaska.