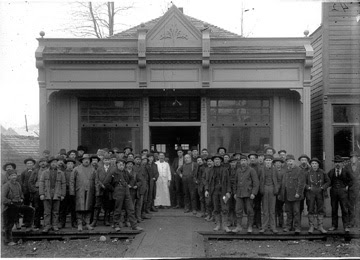 Frank Burney was born on April 9, 1874 in Wisconsin. In 1896 he was working as a farmer in Fresno, California. There were other Burney’s in the area so presumably he went there with family. Farming must not have been too interesting, so in May of 1897 he came north. And here is where he disappears for a couple of years.

Now, this may be a stretch, but there was a U.S. Marshall appointed in Skagway in July, 1898 by the name of Barney, no other information. He is significant because he was one of the three Marshals that arrested the Soapy gang during July 1898. In March of 1899, Charles Eckerman, the bartender at the Board of Trade Saloon (seen above in 1898), tried to shoot Barney (Eckerman was shot and killed 6 months later). It was about this time that Burney went to Dawson, so I am jumping to the concussion that Barney and Burney are one in the same.

In any event, Blanche and Frank left the Yukon and moved to California, living in Berkeley, Long Beach, Fresno and Los Angeles. Blanche died in 1956, Frank in 1957 and their daughter, born to them late in life, Virginia, died in 1941 at the age of 26.