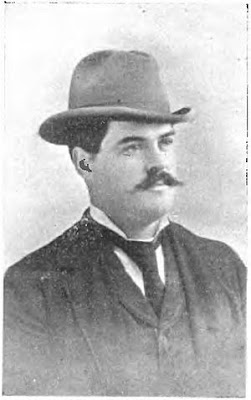 William Cobleigh was the assistant postmaster in Skagway in 1897 and part of 1898 until he moved to Dawson. He succumbed to typhoid once he got there. Should have stayed in Skagway. Here is the obituary from his home state where he was an esteemed birder:

“THE Cooper Ornithological Club has suffered the loss of an esteemed member in the death of Mr. William S. Cobleigh, who was perhaps best known to our readers as a worker in Illinois ornithology, although, for three years past he had been an active member of the Club. His excellent writings on the birds of his native State, Illinois, in many of the older magazines have made his name familiar to all the older workers. In August 1897 he left California for the gold fields of Alaska, where, a year later he was stricken with typhoid fever and died at Dawson [on this day] September 14, 1898.

The “Klondike Nugget” says: “William S. Cobleigh, formerly assistant postmaster at Skaguay, who came to Dawson in July last and who recently died at St. Mary’s Hospital, was buried Sunday afternoon (Sept. 25) in the Dawson cemetery under the auspices of the Order of Elks, attended also by members of the Masonic Fraternity and Knights of Pythias, of which organizations he was a member. In life he was a mgnificent specimen of physical manhood, being over six feet in height, and in good health, weighing 225 pounds. Contracting typhoid fever, despite the most diligent attention medically and otherwise he succumbed to the dread disease. At the cemetery a simple but beautiful service was rendered, the Rev. R. J. Bowen officiating. Bro. Captain Jack Crawford, the famous poet scout, made some feeling remarks after which Bro. George Noble of Seattle Lodge of Elks sang Nearer My God to Thee, ‘his magnificent voice and the beautiful rendition of this hymn touching the hearts of all. It is expected to forward his remains to his former home at the opening of navigation next spring.’

William S. Cobleigh, whose portrait we present, was born in Pekin, Illinois, August 30, 1868, being 30 years of age at the time of his demise. In 1880 he moved to Peoria, receiving his education in the public schools of that city and Pekin, after which he spent two years at Knox College, Galesburg Ill. In 1889 he removed to Canton, Ill., where he followed farming til his departure for California in 1897. He was married to Miss Jessie Justus of St. Cloud Minn., on Dec. 1892, but no children survive him. He leaves a wife in Peoria, Illinois, father, mother and sister in Los Angeles and a brother in Canton, Ill. He was an authority on the birds of Illinois and donated his large collection to the Peoria Scientific Association a few years since.”