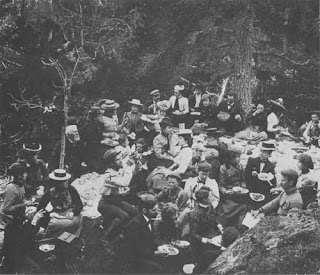 Joseph Beauchamp was born in October 1864 in Canada. He came to Skagway in the Gold Rush and lived in a hut on the east side of the railroad tracks in town. Joseph must have moved to Bear Creek in Yukon by 1910 because he was not in the 1910 census in Skagway. He married Blanche and this is their sad story:

“Joseph and Blanche Beauchamp lived at Bear Creek, 110 miles outside of Whitehorse on the Kluane Road. On February 8, 1913, Blanche gave birth to a male child. The baby was premature and lived for only a few hours. Joseph planned to bring Blanche into Whitehorse for their son’s funeral as soon as she was well enough to travel. However, complications set in and Blanche’s health deteriorated. With the nearest neighbour 20 miles away, Joseph felt he could not leave his wife to seek help. Blanche died a few days later of blood poisoning.
Joseph stoically prepared her body for burial, built a coffin, and made the long journey into town alone with the bodies of his wife and son as his only companions. Father Turnell of Skagway, Alaska conducted the funeral as the Whitehorse priest was not available. Mother and son were buried together in the Whitehorse Pioneer Cemetery, the baby placed in her arms. Blanche Beauchamp died at 40 years of age.”

By 1920 Joseph was back in the Skagway area and homesteaded at Burro Creek which is across the inlet from Skagway. The Camera Club enjoyed a picnic there in 1900 seen above. He lived there until his death on January 12, 1935 and is buried in the Skagway Pioneer Cemetery.