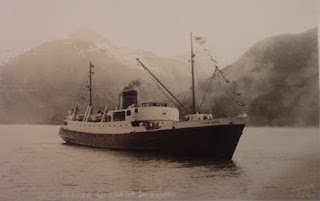 While on the subject of little warships, there is the case of the little Canadian HMCS (Corvette Castle Class) ship built in 1944 in England at Smith’s Dock Co. Ltd. She was the next to last ship of its class finished before the end of the war when the others were cancelled. Of the Castle class ships, three were sunk in enemy action but they sunk seven u-boats. They were underpowered and tended to turn into the wind despite everything the helmsman tried.
First named the Walmer Castle, she was renamed the Leaside before being sold to the Union Steamship Company of Vancouver where she was renamed the SS Coquitlam around 1955. Then sold to the Alaska Cruise Lines in 1958 where she was renamed the Glacier Queen. Here you see her at Skagway as a nice little cruise ship in the 1960’s.
In 1970 she was bought by Stanley M.J. and hulked as a floating hotel near Vancouver B.C.
On the 8th of November 1978 she sank at Anchorage off Seldovia Bay, but was later raised and scuttled by the U.S. Coast Guard about 100 miles west of Cape Elias.