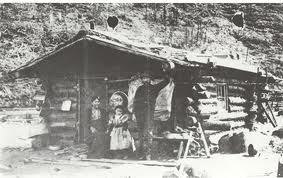 The daughter of George Carmack and Kate Nadagaat Tlaa Kaachgaawaa Mason, Graphie was born on January 11, 1893 in Fort Selkirk, Yukon. George met Kate at Healy’s Trading Post in Dyea and they were a common-law marriage until about 1900. That year George took Kate and Graphie to Holister, California to live with his sister. He went back to Dawson where he fell for Marguerite Saftig L’Aimee a large handsome woman who ran a cigar store. Now it was said at the time that Marguerite sold more than cigars, the men loved her. George took her to Olympia Washington where they were married in October 1900. He then took Graphie from her mother and the new family moved to Seattle with Marguerite’s brother, Jacob Saftig.
Jacob, 33, fell for Graphie, 17 and she became pregnant. They married on June 30, 1910 and their first son, Ernest Charles Saftig was born three months later on October 7, 1910. Later, Graphie remarried someone named Rogers because she died as Mrs. Graphie G. Rogers on March 25, 1963 in California, either in Lodi or Los Angeles. She was 70.
I had a visitor come to my desk last summer who claimed her grandfather was G.W. Carmack, son of George Carmack and that he died in Poteau, Oklahoma but could not give me any further information, so perhaps George had other kids from either Kate or Marguerite.
There has been alot of interest in George Washington Carmack with the release of Howard Blum’s book, Floor of Heaven. It is a fun read if you haven’t read anything else on the story, but the footnotes are a little vague, in my opinion. But what do I know…seen above is a cabin with George, Kate and Graphie in happy times.