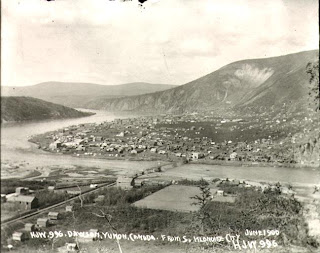 “Harry” Woodside was born in Arkwright, Ontario, Canada in 1858. He was one of the earliest white men to arrive in the North. In 1892 he was the census enumerator for the Yukon. Later he became the editor of the Yukon Sun in Dawson during the Gold Rush. His photographs from this period provide a considerable portion of the recorded visual history of the Gold Rush. He took the photo above of Dawson with Lousetown in the foreground.

Woodside left during the Boer War and volunteered for service in one of the Canadian contingents. He was given the rank of Lieutenant in the regiment and was about to sail from Halifax on the transport with the regiment when he was thrown from his horse in cavalry practice and nearly killed. He was in the hospital for weeks and while there was nursed back to good health by a nurse who later became Mrs. Woodside.

Major Woodside sailed for Africa to join his regiment after he had gotten out of the hospital. He got as far as Durban, South Africa when the war terminated and he was ordered home.

In 1904 he went to join his wife in Winnipeg. He served again with the rank of Colonel in World War I in the 5th Regiment, Canadian Mounted Rifles, and was wounded in France in May 1916. Woodside died in November 8, 1929, in Ottawa. The Fairbanks News reported his death on February 25, 1930.