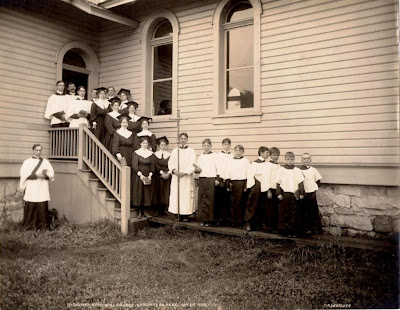 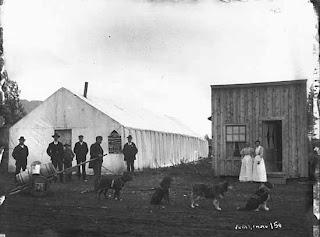 The Reverend John Pringle was a Presbyterian minister who came to Skagway in 1898 and went on to build the first hospital, St. Andrews, in Atlin 1900.
Pringle was born in 1852 but died on this day April 20, 1935 in British Columbia.
His brother George was also a Presbyterian Minister (who married Klondike Kate to her husband) and his brother James was a Sergeant with the NWMP who delivered mail from Dawson to Skagway. His sister Lucy worked as a nurse in the Atlin Hospital in 1922.
Quite a family!
The picture above taken by Anton Vogee in 1899 shows Pringle, perhaps his sister and the Presbyterian Church in Atlin.