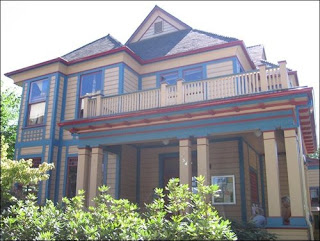 Happy Birthday to Cleaves Rockenfield born on this day, January 19, 1843 in Cincinnati Ohio. He served in the 77th Illinois Infantry, Company I during the Civil War. He enlisted at Elmwood on August 15, 1862 and was mustered out July 10, 1865. He served with his brother (?), Scott H. Rockenfield. They marched to Kentucky, Louisiana and Vicksburg. (There is an extensive narrative of their time at 77illinois.homestead.com)

After the war he returned to Ohio and married Sarah Rees in 1869 and it appears through the census records that many of the Rockenfields then moved to Oregon. They were storekeepers, as was Cleaves, in 1900 in Skagway. Sarah was not here for the census in 1900, perhaps she went back to Oregon.
Above is a picture of the house they built in 1883 in Salem, if I had a house like that I would have moved back down to Salem too.
It was on the northeast corner of Court and Summer Streets. In 1937, two years after the State House burned in Salem, the state purchased the houses on Summer and Court Streets and moved the Rockenfield House to 755 Capitol Street to make room for the garden and State Library. In 1991, during the expansion of the Capitol Mall, the Rockenfield House moved again to its present location on the riverfront. The Village acquired the Rockenfield House in 1990. In 1992, the house opened to the public as part of A.C. Gilbert’s Discovery Village.
The Rockenfields both died in Portland, Cleaves in 1907 and Sarah in 1917 and are buried in the Salem Pioneer Cemetery.