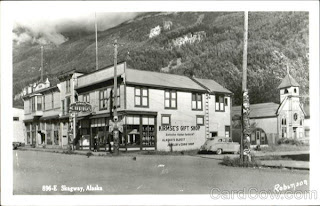 The first Mrs. Herman Kirmse was born in Oregon in February 1869, and came to Skagway with the family in August 1898. She died on this day, July 15, 1900 of convulsions in Skagway, but was buried in Seattle.

Herman then remarried in September of 1900, to Hazel Cleveland. They lived here for a couple of years, but then Herman accidentally drowned in Ketchikan after he fell off the dock there in 1912. The rest of the family stayed only a few years and were gone by the next census in 1920.

The Kirmse’s curio store has recently seen a revival with antique displays and other antiques for sale (corner of 5th and Broadway).
Coincidentally, today a man came in and asked about the “Kirmse Clock” on the mountainside. He was amazed that a clock could have been taken up there over a hundred years ago. Despite being told that the clock is just painted on the rock, he still chose to believe it is a real clock. Alas, we did not argue with him, he went off happy.