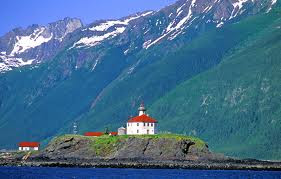 Although Sarah never came to Skagway, millions of people have wondered about the lighthouse which bears her name, Eldred Rock Lighthouse. The lighthouse, seen above was first lit in 1905.
In 1883 William Healey Dall voyaged up the Alaskan coast and wrote a book called the Alaska Coast Pilot – it describes the coast with measurements, drawings and maps for pilots who are going up the coast of Alaska. Along with him on this voyage was Marcus Baker, a cartographer and it was he who named various points along the coast after his wife, Sarah Eldred.
Sarah was born in Climax, Michigan on September 2, 1846 and married Marcus in Kalamazoo on December 13, 1874. She died on December 19, 1897 during the gold rush, but presumably never having left Michigan.