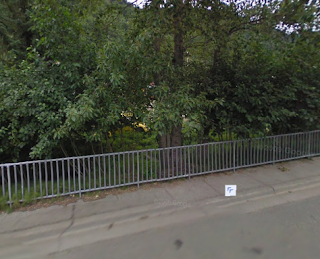 Patrick McFadden had a few too many drinks and on his way home down Broadway, he fell into the creek, face down and drowned. Since poor Mr. McFadden was a stranger, no one knew him so it was assumed he was about 42 years old. He died on August 22, 1902 and is buried in the Gold Rush Cemetery.

Now you might think this was an unusual case and that it could not happen again – but no fellow sleuthers! Two years ago, a fellow in town did exactly the same thing! Fortunately for him, his friends found him and dragged him out before he drowned too! If you are in Skagway this summer, look for a young fellow with a wicked scar on his forehead. Above is a picture of this wicked creek.