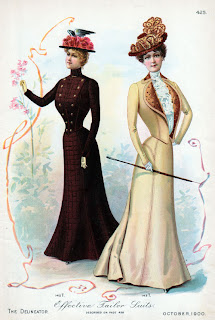 Seen above are a couple of fashionable 1904 suits.

Dr. Keller was a dentist in Skagway from 1899 to about 1922. He also published the Daily Alaskan from about 1905 to 1915 according to the directories.
He was born in St. Paul Minnesota in 1860. The 1880 census in St. Paul Minnesota shows Mrs Aunice Keller with eight children that ran a lumber business. Her husband must have died in 1879 because the youngest child was still a baby.
Louis married Martha in 1891 and moved to Skagway in the Gold Rush. He was President of the Fraternal Order of Elks in 1900 and was a member of the Arctic Brotherhood in 1907. He was also president of the Chamber of Commerce in 1903. He was elected Mayor of Skagway in 1922 but became ill with throat cancer and died on this day, November 30, 1922 in Seattle. He and Martha had no children.
Louis’ brother, John Michael also moved to Skagway and started a drug store, “Keller’s” which is still run, but as a jewelery store today. John also helped to run the newspaper with Louis and Martha.
Seen above, in hard times before restoration efforts in the 1980’s is the store. 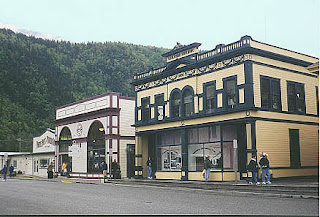 Happy Birthday to Margaret Elizabeth King, born on this day, April 13, 1902 in Skagway. Her mother, May Farrington King and her father, William B. King both worked in the head office of White Pass. William was the chief auditor in 1902. William was also in the Arctic Brotherhood in 1900, City Council in 1903-4, Mayor in 1905, and the President of the Elks. The family stayed in Skagway until 1921.

Pictured above is the White Pass Administration Building that Mr. King worked in. Today it is the administration building for the Klondike Gold Rush National Historical Park.