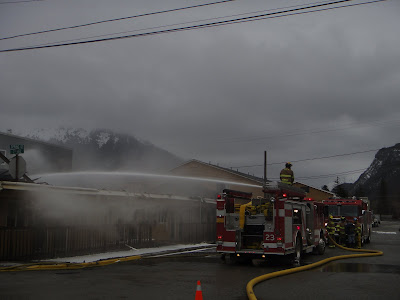 Apparently last night at 11 pm a fire broke out in the 600 wing of the Westmark hotel – the building next to Diamonds International. As I write this, there is still smoke coming from the ruins. The volunteer fire department has been up all night fighting it and has successfully stopped it from going further.
Jeff Brady has some great pictures of 20 foot flames shooting out the roof and he said that this Friday’s paper will have the whole story. The offices of the Skagway Jewelry Company, Avis and M&M tour sales are completely gutted. Water from the sprinklers in the Diamonds International Store is flooding out the doors. The store will need extensive repairs to reopen in May. Photo by Reed McCluskey. 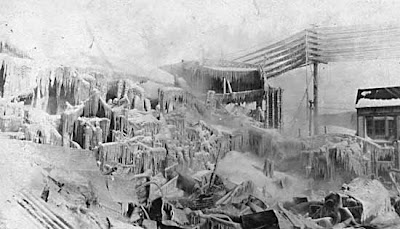 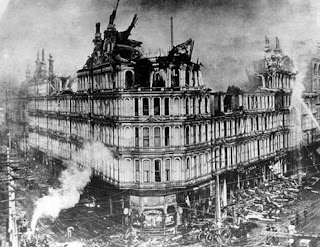 Lewis Meyers was a merchant in Skagway in November of 1898. He decided to go to San Francisco on business.
On November 22, 1898 he checked into the beautiful Baldwin Hotel downtown at the corner of Market and Powell. He never checked out. At 3:20 am a fire broke out and soon the entire hotel was in flames with people hanging out of windows and jumping to the ground. Lewis had a heart attack and died on November 23, 1898.

When the Baldwin Hotel was completed in 1877 at the cost of $3 million, it was opulent and majestic. Unfortunately, by 1898, the economy was in a downslide and opulence did not attract paying guests. Elias Jackson “Lucky” Baldwin, a California comstock miner had invested most of his money into the hotel and land. Like many others during this economic depression, Baldwin mortgaged several properties, including his hotel, in an attempt to pay his bills. But when the hotel caught fire and burned to the ground, he was not that unhappy. He was able to sell the property for $1.1 million, about $200,000 more than the amount owed on the hotel’s mortgage—proving that the nickname, “Lucky” was well-earned.

Unfortunately Mr. Meyers was not as lucky, he should have stayed put in safe Skagway, Alaska! 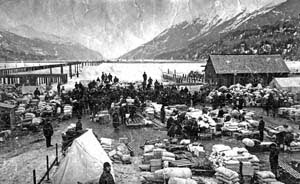 On this day in 1898 there was a fire in Dyea. The Every One’s Home Hotel and the adjoining saloon and dance hall there burned at night. Although 20 people were sleeping there, 4 people did not make it out as reported by the New York Times on March 10, 1898. The dead were identified as Bert Meeker of Portland, a man named Russell and two unidentified men. It was also reported that a woman’s body was recovered, but Mrs. Bert Meeker escaped as reported by the Dyea Press on March 12, 1898 and was staying at Murray’s.