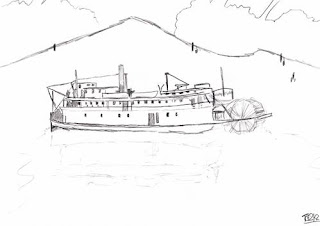 Walter, 17 years old was a steward on the sternwheeler steamboat Florance S in July 1900. The Florance S, a 100 ton 75 foot ship, was built in 1898 and was originally owned by Seattle-Yukon Transportation Company. It was sold to Captain Sydney Charles Barrington in 1900. When it rolled over at a corner and foundered in the “Thirtymile” section of the Yukon River, Walter, and passengers Mrs. Stewart, and her daughter Ada all drowned there. (Various sources also say that the ship rolled on July 25 or July 29, 1900). The boat was sidelined for a few months and then converted to a barge in 1901. It was resold to Captain Wallace Langley in 1905. It was owned by George S. Black by 1939.

Although Captain Barrington was the captain of this ship, a man named Jordan was at the wheel at the time of the accident, and was arrested for manslaughter.

Young Walter Monastes was from Skagway, and his body was shipped here and buried in the Gold Rush Cemetery.