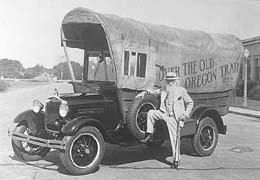 Another great character, Ezra Meeker was born in a log cabin on the family farm in Huntsville, Ohio in 1830. He married Eliza and moved to Puyallup Washington by covered wagon in 1852. They had a hops farm in 1891 but then in 1892 a plague of hop lice struck the Pacific Coast, devastating crops. Meeker’s crop sold for a fraction of the expected price. He later wrote, “All my accumulations were swept away, and I quit the business — or rather, the business quit me.”

In 1896 Meeker traveled to Alaska, opening a store in Dawson and filing a mining claim. Despite four trips to the Klondike, he never found gold, however, in 1898 at the age of 68, he formed a company with George Cline and John F. Hartman to dry vegetables for soups, Mrs. Meeker helped dry the vegetables for the Klondike Venture. In the spring, Ezra went north with his son Fred over the Chilkoot Pass with 15 tons of dried vegetables and chickens. On one stretch of 2000 feet they paid $40 a ton for freighting. They went down the Yukon in a flatboat where Ezra fell in the White Horse Rapids. They sold potatoes, onions, chickens, sugar and condensed milk. Later they sold fresh vegetables that were brought up individually wrapped.

In 1901 Ezra Meeker left the Yukon and came home to stay, arriving two weeks before his golden wedding anniversary, but without the gold. He made four trips to the Klondike and had saved possibly $19,000, which he lost in the final mining enterprise. A deep freeze came a month earlier than usual and prevented his thawing the ground, and cut off water for sluicing. A later report stated that the mine he lost proved profitable.

Meeker worked for many years to preserve the famous Oregon Trail (it became part of the National Trails System in 2004). In October 1924, he flew over a portion of the trail in a single-engine, high wing Army Fokker T-2. By ox, Meeker made two miles per hour crossing the Trail in 1852 with his family. His plane flew the route at 100 miles per hour.

Ezra said he never spent even one day sick in bed during his entire 58-year marriage. He died on this day, December 3, 1928 in Seattle (of senility) and is buried in the city he founded, Puyallup, Washington. He is seen above shortly before his death, in 1928 with his Model-A Ford with covered wagon. 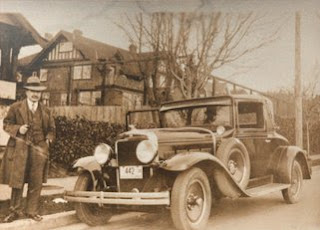 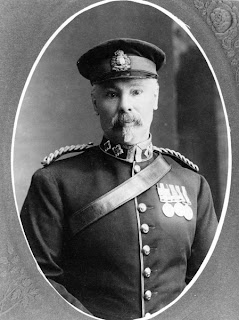