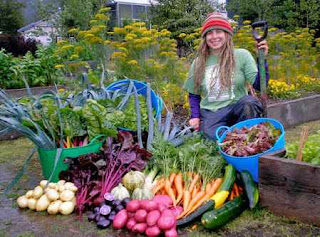 Marion Granger was born on February 4, 1866 in Calhoun, Wisconsin. When she was 35 she married Henry David Clark in Tacoma and they moved to Skagway to farm. A Clark child was born and died in 1902 who may have been their first child, but they then had two daughters, Floris in 1904 and Dorothy in 1910 who are often pictured in the fields of Clark Farm on postcards.
Henry first started potato farming in Dyea and later had a farm on the other side of the Skagway River where the Jewell Gardens are now. In the tea room are several enlarged photos of the family and the gardens.
Marion was the treasurer of the Presbyterian Church for 26 years and died on this day, April 28, 1947 and is buried in the Pioneer Cemetery with Henry.
Above is picture of a modern gardener at Jewell Gardens with a bushel of organic vegetables! Last summer our family did the CSA with them and I plan to again – what a great program! It is so great to know that your food is free of pesticides and chemicals. Garden On!