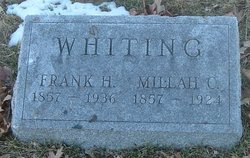 Born in 1857 in Mt. Pleasant Iowa, Frank Herbert Whiting came to Skagway on Friday, May 27, 1898 as Superintendent of the new White Pass & Yukon Railway. He is a background character in the Soapy shooting, having been busy on another dock unloading rails and sleepers with Mr. Graves at the time. After the shooting the Citizen’s Committee appointed the “Committee of Safety” to determine what the fate would be of the many Soapy conspirators, alleged friends and miscellaneous suspicious characters. The “Committee of Safety” consisted of eleven men. Four of these men managed transportation companies, two owned hotels, one blacksmith, two lawmen and of course the two White Pass managers, Graves and Frank Whiting. These eleven men selected the prisoners and forced them to sign over their money and agree to be handed over to the legal authorities.
Some of these men that were accused of vague crimes said that the “Committee” used their temporary and arbitrary power to get rid of business competitors in the witch hunt. Certainly in the volatile atmosphere, few Skagway residents questioned the doings of the most powerful men in Skagway. A total of fifteen men and one woman were deported but no doubt others left rather than be subjected to the “Committee” or possibly lynching.
Jeff Smith points out that when these deportees arrived in Seattle on the Steamship Tartar there is no evidence that any were ever taken into custody.
But back to Frank Whiting. He and his wife Martha and their 6 kids left Skagway in 1903. They probably returned to Denver, where they had lived before. Frank died on this day, January 3, 1936 in Seattle on a visit to his son. He was buried in Denver in the Fairmont Cemetery. One other note was that he was the great grandson of Timothy Whiting who fought in the Revolutionary War, and so was a compatriot SAR.