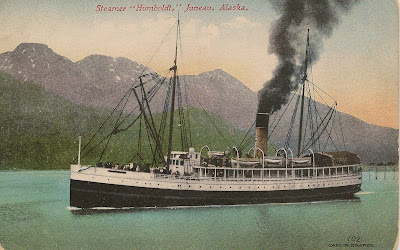 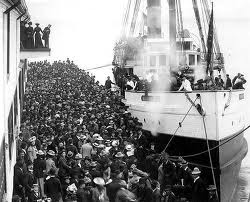 Elijah Baughman was born in 1859 in Oregon. He worked on ships all his life. He commenced steamboating on the Puget Sound as a deckhand on the steamer Zephyr in the 1880’s, although he had previously had considerable experience on the Columbia River. After leaving the Zephyr he was mate on the steamers Chehalis, City of Quincy, and Washington. He was master of the steamer Eliza Anderson for three years. He was pilot on the ship City of Seattle for over two years (see previous blogs on the City of Seattle).
While en route from Port Townsend to Seattle, Baughman was the pilot for Captain Gilboy, on the steamship Premier when it collided with the steamship Willamette off Marrowstone Point on October 8, 1892.
It was a tragic accident. The 200-foot Premier with 70 passengers, collided with the freighter S.S. Willamette, that was outbound to San Francisco from Seattle with 2,700 tons of coal. Both vessels, proceeding “full ahead,” met in a thick fog that enveloped Admiralty Inlet and Puget Sound. The Willamette’s bow struck the Premier at a 45-degree angle on the port side, just opposite the pilot house, killing five persons and injuring 18.

The hulls of the vessels became interlocked, making it impossible to separate. The Willamette finally pushed the sinking Premier across Admiralty Inlet, beaching her near Bush Point on Whidbey Island. Meanwhile, the passengers were able to climb from the Premier’s decks onto the bow of the Willamette. The tugboat Goliath arrived on scene a short time later, and took the surviving and dead passengers onboard, transporting them to Seattle. The Canadian Pacific Railway Company, owners of the Premier, patched up and towed the ship to Victoria B.C. to escape the damage suits that were immediately filed against her. After being repaired, the vessel was renamed the Charmer, but never again ventured into American waters. It went from Victoria to Vancouver only.

Another ship that Baughman was captain on was the Steamer Humboldt that made several trips to Skagway. Here is another eerie story from Newell:
“The Humbolt was originally designed as a coastwise lumber carrier. However, due to the gold rush, she was converted to a passenger liner prior to her launching in 1897. Captain Elijah G. Baughman was the Humbolt’s pilot on her first voyage to Skagway. In 1900 he was appointed master, and he remained with the Humbolt throughout his entire career as a shipmaster. By 1933 the old Humbolt had been relegated to a dreary mooring in the San Diego boneyard; Captain Baughman had retired and was living ashore in San Francisco. Lonely and deserted, the old Alaska treasure ship lay quietly at anchor for two years…until the night of August 8, 1935. That was the night Captain Baughman died…slipped his cable, as oldtime sailors used to say. And it was the night the Humbolt slipped her cable, too, and sailed again for the last time. Toward midnight a Coast Guard cutter hailed an unlighted ship moving silently through the harbor. It was the Humbolt, out of the boneyard at last and heading, with eerie precision, toward the open sea. The Coast Guard boarded her and found her warped decks and dusty cabins deserted. They marked it down as a freak of wind and current and towed the Humbolt back to the ship’s graveyard. No living hand, surely, guided the Humbolt that night, but the relationship between a man and a ship who have lived their lives together can become a strangely mystic one. And there are more things on heaven and earth…and on the sea…than our philosophy has dreamed of”

Seen above is the Humboldt in 1901 heading for Nome.