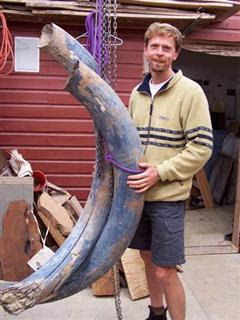 D.N. Hukill was born in 1858 in Covington, Kentucky. He came from Seattle in 1899 with his new wife Henrietta Catherine McKenzie. They had four daughters and three sons born here in Skagway. His granddaughter still lives in Skagway, (Mavis Irene).
David first worked White Pass construction, and then as a janitor and carver. He later worked for the City of Skagway as a laborer for streets. He was said to be a labor organizer. He died on this day, November 15, 1917 in Sitka at the Pioneers Home there. He was 59 years old.
Seen above is a modern Skagway fossil mammoth ivory carver with his supply.