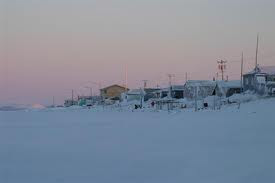 “A thrilling story of starvation and death in the wilds of Northern Alaska is recorded in Skagway, Alaska. The victims were M. C. Daly of Boston, Mass., and two Frenchmen, names unknown. The story was brought to Skagway by William Lawlor, an Arizona miner.”

Although this appeared in the Seattle papers in November 1899, it is dubious in my opinion that it happened in Skagway or the Yukon because it is a year after the gold rush at a time when businesses and roadhouses had been set up. Further there is no record on this day of Mr. Daly or two Frenchmen dying here.
However there was a tragedy at Kotzebue where at least 48 people starved to death under horrible conditions in August 1899 until Lt. Jarvis and the revenue cutter Bear arrived to rescue the miners there. read that story here:
http://genealogytrails.com/alaska/northwestarctic/goldrushdeaths1899.html
The photo above is of Kotzebue in winter-I think I will go get a hot cocoa now.