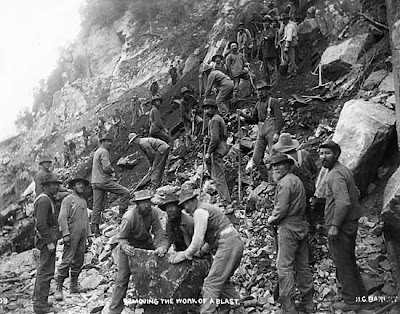 John O’Neil worked for White Pass and was struck by a falling rock up at White Pass and died. His death record said his complexion was sandy, his height was 5’6″, and his weight was 140 lb. He was born in 1867 and died on this day, July 20, 1898 and was buried in the Gold Rush Cemetery on the 23rd of July.
This Barley photo shows workers removing rubble after a blast. White Pass still uses explosives to remove hazardous rock, their storage shed for explosives is suitably up in the mountains near the track but far from mischievous fingers.