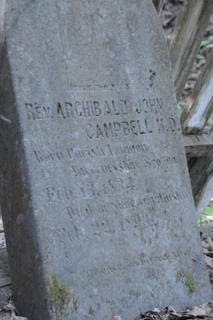 In February of 1898 Archibald John Campbell, a Scot, came to Skagway to be the Episcopal Minister and dubious doctor.
There was some controversy about Dr. Campbell.
When Presbyterian Minister John Sinclair came to Skagway in 1898 from Ontario, Canada, he found that the Reverend Doctor Campbell was firmly ensconced in the Union Church, that had been built in 1897 by Rev. Dickey. Campbell did not welcome Sinclair and told him the Union Church was Episcopal and refused to move out. Sinclair had been sent by Bishop Rowe because of odd allegations against Dr. Campbell.
Campbell was later fired by Bishop Rowe because of allegations of misconduct with females by a neighbor, George Aggers. Aggers and others said women were seen coming and going from the Reverend’s home at all hours of the night. The women supposedly were coming to Dr. Campbell for his famous internal massage or liver therapy. After some months of dispute, Campbell moved to a cabin on the hillside where he apparently was quite agitated and died on this day, February 22, 1899 of a heart attack.