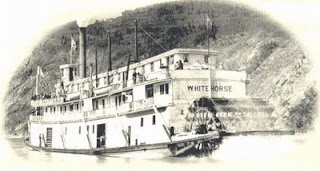 Captain Bailey was a captain for one of the White Pass & Yukon Route Steamships. Born in 1865 in Wisconsin, he died on this day, October 27, 1919 in Mayo, Yukon Territory of stomach ulcers. His body was sent to Seattle for burial. He came to Skagway in 1897 and worked as a laborer for White Pass and continued to work until his death.

Sternwheelers were an ideal vessel for the Yukon River’s shallow, narrow waters. The stern mount made for a narrow vessel, and protected the paddle wheel itself from snags and sweepers. The flat bottom gull allowed for little draft, even with heavy cargoes. The paddlewheel helped grounded vessels off sandbars by reversing and washing sand away from the hull: a vessel could also approach shallow waters stern-first and dredge a channel for itself. The sternwheeler could land practically anywhere since docks were not necessary.

Just after the railway reached Whitehorse in 1900, WP&YR set up a marine division called British Yukon Navigation. BYN built a shipyard in Whitehorse and a repair yard in Dawson City. Among the first vessels built was the Whitehorse, seen above, the “old grey mare” which served for 53 years – the longest continuous service of any vessel on the Yukon River.

As the primary means of transportation and communication in the Yukon for the first part of this century, the paddle-wheeler was an integral part of the life of Yukon people. When the last of the boats were pulled from the river in 1955, a way of life ended.