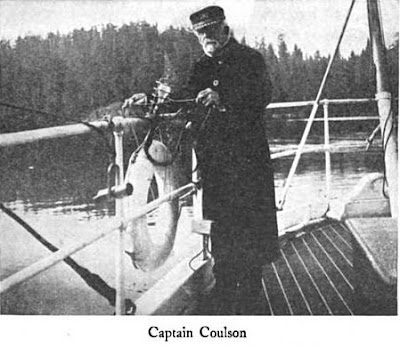 Coulson was born in 1839 in Indiana. He was the Captain of the McCulloch which was built in 1897 and was Admiral Dewey’s dispatch boat at Manila. On the night of April 30, 1898 Dewey was sneaking into Manila Harbor under cover of darkness. The Spanish garrison at Corregidor caught sight of them and the shots fired at the McCulloch were the first of the Spanish American war. The McCulloch was in the Revenue Cutter Service founded in 1789 by Alexander Hamilton to collect revenue, aid in the customs revenue laws, render assistance to vessels in distress, guard the seals and fisheries, prevent sales of arms and liquor to Indians, supervise lighthouse service, aid in the coast survey and do scientific research. The McCulloch had two rapid fire guns and two magazine guns (taken in Manila from the Reina Cristina a Spanish warship). Anyway, Coulson, seen above on the McCulloch was responsible for all of this and more, on the west coast and would stop at Skagway occasionally. He was made an honorary member of the Arctic Brotherhood here. He died on September 24, 1918 in Berkeley, California.