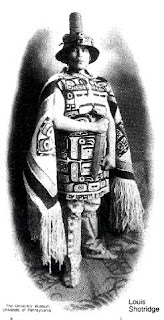 Louis Shotridge was born on this day, April 15, 1886 in Klukwan a native village near Haines to George Shotridge (Yeil gooxhu) and Kudeit sáakw. His Tlingit name was Stoowukháa, which means “Astute One.” He was perhaps murdered in 1937, but that is at the end of this story…

Louis was named after a (Presbyterian) missionary in Haines, Louis Paul. The name Shotridge derived from Louis’s maternal grandfather Chief “Tschartitsch,” this being a Germanicized spelling of the Tlingit name “Shathitch” or, in contemporary Tlingit orthography, Shaadaxhícht.

Shotridge was educated at the Haines mission school, where he met his wife-to-be, Florence Dennis (Kaatkwaaxsnéi), whom he married in a traditional Tlingit arranged marriage; she was of the Lukaax.ádi clan. Florence became an accomplished weaver of baskets and Chilkat blankets and performed her technique at the Lewis and Clark Centennial Exposition in Portland, Oregon, in 1905.

Perhaps inspired by contact with the ethnologist Lt. G. T. Emmons, Louis accompanied Florence to Portland to exhibit and sell Tlingit artifacts from Klukwan. Forty-nine were sold to George Byron Gordon of the University Museum of Archaeology and Anthropology at the University of Pennsylvania in Philadelphia, who subsequently hired him to collect more, thus beginning a lifelong career for the Shotridges as artifact collectors, art producers, and culture-brokers.

In 1912 the Shotridges visited Philadelphia and met the anthropologist Frank Speck, who introduced them to Canada’s leading anthropologist-linguist, Edward Sapir. They began to work with Sapir as well, providing him with essays, information, and objects.

In 1914 the Shotridges met Franz Boas in New York and worked with him on recording information on Tlingit language and musicology. Boas included Louis in his lecture audiences and eventually in his weekly round-table discussions among anthropologists at Columbia University.

Starting in 1915, Louis worked for seventeen years as Assistant Curator at the University Museum, making him the first Northwest Coast Indian to be employed by a museum. Louis was an ethnological assistant and expert on the traditions of his people, the Tlingit nation of southeastern Alaska.

By the 1930’s Louis was also active in the Alaska Native Brotherhood and served as its Grand President. He made a living from fishing, odd jobs and the sale of an occasional artifact. In 1935, he took a job as a government stream guard. His responsibility was to prevent fishing in closed areas, and it was an unpopular duty among Native fishermen.

In 1937, Shotridge was found on the ground near his cabin in Redoubt Bay, about 16 miles south of Sitka. He had a broken neck and had apparently lain there for several days before a local schoolteacher found him. He was taken to a hospital in Sitka where he died 10 days later.

Robert De Armond, an Alaska historian who was a young man then, served on a coroner’s jury that investigated Shotridge’s death. The jury concluded that Shotridge had fallen from the roof and ruled it in accident. But even De Armond isn’t convinced that it was.

“The story among the Natives has always been that he was killed by people from Klukwan,” he said. “They were very clever at making it look like an accident.”

Though there was no proof of foul play, De Armond said there were several instances of Native men dying under mysterious circumstances about that time. Some had been suspected witches. Perhaps a Klukwan fisherman was in Redoubt Bay, found the fishing slow and spotted Shotridge.

“I think it was some of the Klukwan people who were angry at him for having sold so much of the material to Pennsylvania,” De Armond said.

“It was one of those mysteries that never will have a real answer.”

Wikipedia; death record of Richard Shotridge; “Collecting the Past” by Marilee Enge online.