Ernest Keir was born on New Years Day, 1878 in Vernon Wisconsin.
In March 1898, Ernest and his brother set off from Wisconsin for the Yukon. Ernest used his 6.5″ x 8.5″ full-plate camera to record the trip and his stay in Dawson. Although an amateur, he managed to sell enough of his photographs, through a Dawson City drug store, to support himself in the Yukon. His biggest difficulty was in acquiring enough photographic supplies to keep in business. Keir left the north in 1900 and settled in Saskatchewan. He lost the negatives of his Yukon trip in 1913. He died also on New Years Day, 1941 and is buried in the Pines Cemetery in Spokane.
He is seen above in a cabin with some friends during the Gold Rush, he is at the far right. They are showing off their music collection of cylinders and Victrolas which helped to keep them sane in the long winters. Their version of ipods. 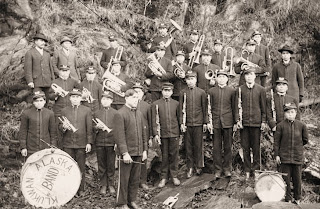