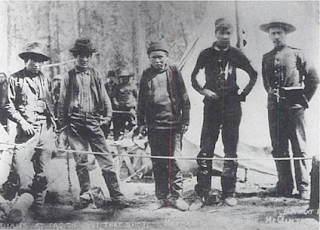 Tagish is a community about 80 miles from here on the road to Atlin. On this day, May 10, 1898 there were two murders committed. The victims, Christian Fox and William Meehan, gold rushers, were shot by four Native boys, known as the Nantuck Brothers. The case became quite famous at the time. All four Natives were rounded up and imprisoned in Dawson, Frank and Joe died of tuberculosis in the jail. Dawson and Jim Nantuck were found guilty and hung on August 4, 1899.