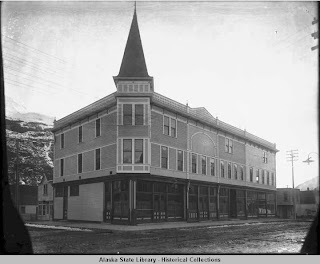 Fred Patten was born in Nebraska in 1873 and Clara was from Wisconsin. They met and married in Auburn, Washington and had a daughter there in 1900. They had moved here to Skagway around that time. Sadly, Clara died on this day, December 14, 1905 of blood poisoning and is buried in the Gold Rush Cemetery.
Fred stayed on and made a partnership with Chris Shea as carpenter and contractor. Together they wrote a book called “The Soapy Smith Tragedy” in 1907. (If you can find this book, it is worth quite a bit now.)
By 1907-1908, Skagway’s glory days as a gold rush boomtown had passed. Vacant buildings, derelict shacks and debris were visible everywhere. One visitor described Skagway as “the scrap-heap of creation.”
In an attempt to revitalize the town, Fred and Chris led a drive to centralize the town’s business district on Broadway. In 1908, Shea and Patten purchased two barracks, sawed the longer one in half, and moved all three to their present location on Broadway. The two halves were remodeled with a new false front to make up the Pack Train Inn and the Trail Saloon. By 1910 they had both moved on.
The building currently houses a fur store and a diamond store in the summer and says “U-Ah-to-no” on the side.