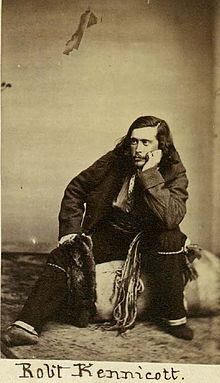 Robert Kennicott was born in New Orleans on November 13, 1835. In April 1859, supported by the Smithsonian Institution, the Audubon Society of Chicago, and the Hudson’s Bay Company, he set off on an expedition to collect natural history specimens in the subarctic boreal forests of northwestern Canada in what is now the Mackenzie and Yukon river valleys and in the Arctic tundra beyond. Hudson’s Bay Company fur traders in the area liked him and so Kennicott encouraged them to collect and send natural history specimens and First Nations artifacts to the Smithsonian. He returned to Washington at the end on 1862. With the Civil War in full play in 1862-64, Robert and his younger brother lived in the Smithsonian Castle along with Edward Drinker Cope and other noted naturalists.

He traveled across the Unalakleet portage to Nulato over the winter of 1865-1866 with Charles Pease and 2 Canadians, Frank Ketchum and Michael Lebarge.

In 1866, Kennicott failed to reach Fort Yukon, where he expected to meet another party from the Frazer River. One story says that this failure so preyed on his mind that he took a dose of strychnine. Other reports state that he died of a heart attack, but in any event we know he died on May 13, 1866. His remains were returned to the Kennicott Family plot in Glenview, Illinois at The Grove, which is a National Historic Landmark.

To commemorate his efforts on behalf of science, the Kennicott Glacier, Kennicott Valley, Motor Vessel Kennicott, and the Kennicott River were named after him.

Alaska and its Resources by William Healey Dall; The Dyea Trail January 19, 1898; Wikipedia.