President Warren Harding visited Skagway on July 11, 1923. Leaving here, he re-boarded the USS Henderson on his trip south to San Francisco where he died. Another ship in the presidential fleet was the USS Seattle. Both ships were involved in accidents in the days that followed: the USS Henderson was rammed by the USS Zeiler in Puget Sound and the USS Seattle ran aground in the Sound. Barely two months later, one of the biggest disasters in US Naval History occurred which I will summarize briefly here.

On September 2, 1923 there was a massive earthquake in Japan, the resulting tsunami and strong currents reached the California coast just as a heavy fog further complicated navigation. On September 8, in the dark of night, the passenger steamer Cuba went aground on San Miguel Island. My husband and I lived on San Miguel once, 30 years ago, and the remnants of that shipwreck were still visible on the beach at certain times when we lived there.

Tragically, on that same day there were 14 new sleek “flush deck” destroyers that the Navy was testing at full battle speed on a mission from San Francisco to Los Angeles. The Navy was anxious to prove their worth since President Harding had been a staunch supporter of Navy funding, but with his death, the subsequent administration was not. Unfortunately, that night, at 9 pm, a total of nine destroyers plowed, at 20 knots into the California coast, at a place called the Devil’s Jaw near Santa Barbara. Seven were completely destroyed and 23 sailors died. The dramatic full story of the crash, heroism and tragedy can be read here: 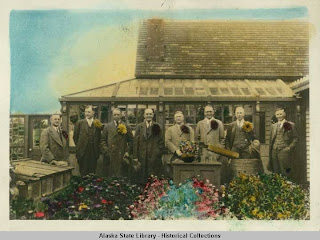 So Happy Birthday to Victor Hahn born on this day, August 19, 1868 in Philadelphia, Pennsylvania to German parents.
He arrived here in Skagway on May 5, 1898 and originally worked as a draftsman. He succeeded Rogers as the Superintendent of the White Pass Railroad in 1906 and worked here until 1947. He must have been quite a politician to last that long as Superintendent!
He died in 1958 in San Francisco at the age of 90. 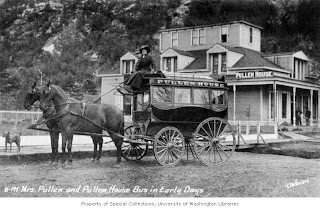 Happy Birthday Mrs. Pullen!
Hattie Smith was born on this day, August 5, 1869 in Hope, Dane County Wisconsin. she married Mr. Pullen in 1880 and the clan moved to La Push Washington.
When the call of gold came, Harriet packed up and came to Skagway where she lived the rest of her life. She saw it all, horses that could not be off-boarded at Dyea – she jumped on their backs and rode them off through the water to the beach. She made pie tins out of flattened cans and started selling pies. With the money she made there she built a hotel that became the pride of Skagway, the Vanderbilts, President Harding and movie stars stayed there.
I first read of her in an article in Reader’s Digest in the 1960’s as one of their “Most Unforgettable Characters”. Quite a lady!
She died on August 8, 1947 in Skagway and is buried near her home on the east side of the railroad tracks.