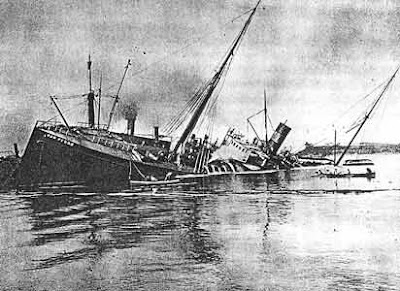 In the Victoria Daily Colonist for Wednesday March 30, 1898 there was the following article which listed many ships that were traveling up and down the Inside Passage.

For those of you who follow the sinkings and near misses, this had lots of good information:

The early spring in the north, hailed with so great delight by the eager Klondiker, has set the iceberg fleet in motion sooner than usual. In consequence, while the journey to the Lynn Canal is invested with a new element of fascination and spectacular grandeur, shipmasters view with alarm the white flotilla as an added menace to the life of the small craft in the Klondike trade. Acco4ding to Captain Roberts, of the City of Seattle, which has just completed the fastest round trip ever made between Victoria and the north, two steamers at least have already come to grief, while grave apprehension is expressed concerning others.

When the Seattle visited Juneau on Saturday morning last she found there the 133 ton Puget Sound steamer Scotia, which was being discharged in haste for the purpose of going on the beach to repair, and leaking badly the while. She had been up-bound, loaded to the guards and in charge of Captain Johnson, and had traveled on Friday afternoon past a procession of bergs. During the night, while in Taku Inlet, she collided with one, despite a sharp look-out striking the silent mass of ice with such force that her stern fared badly. It may be days before she is able to proceed.

Later on Saturday, the Seattle passed the San Francisco steamer Hermosa, Trelethan master, which had come to grief while homeward bound and light, having completed her initial trip to the Lynn Canal. She had had the misfortune to break her shaft, and was anchored at Wrangell Narrows, awaiting the coming of an American tug to complete her interrupted trip. At Ketchican on Sunday it was learned that the steamer George W. Elder had been ashore on Mud Bank for twelve hours the previous day, but had got off unaided, and without injury.

At Ketchican, too, the Seattle’s officers heard t he rumors that the little steamer “South Coast” – another of Puget Sound’s contribution to the coffin ship fleet – had been lost above, neither confirmation nor details being obtainable, although the storekeeper said that he had heard the little steamer had been crushed by an enormous berg. The South Coast was a housed-in, wooden steamer of fair size, and left the Sound, up-bound, something more than a week ago.

The City of Seattle saw nothing and heard nothing of the Utopia, which left Seattle heavily freighted on Sunday week; nor the Alice Blanchard, the latter having continued her trip to Copper River. Nor was the little steamer Mist sighted on the voyage, although the Romona was passed at 4:30 Monday morning, having just got through Seymour Narrows.

Of the talked-about shipping in the north, the old bark Canada is said to be slowly but steadily settling in the water near the mouth of the river, abandoned by all having interest in her. The North Pacific is expected to make but few more trips between Lynn Canal and the Sound, her summer mission being to maintain communication between Juneau, Dyea and Skagway.

The Seattle, which spent all yesterday in port for inspection, could well afford the time, her just completed trip having been the fastest ever made between Victoria and northern ports. Incidents of the run down, as related by the log are as follows: March 25, passed steamer Thistle; at 7:46 stopped in answer to signals, at Berner’s Bay, and received on board a man who had fallen down the side of the mountain. He was badly injured and was landed in Juneau for hospital care. At 5:10 p.m. passed the steamer George W. Elder, bound up. On March 26, met steamer Navarro, north bound; also passed gasoline steamer Bessie K. bound south; met steamers Del Norte, Farallon and Tees, bound north.

seen above is a drawing of the San Pedro, a famous shipwreck in the Inside Passage in 1891.