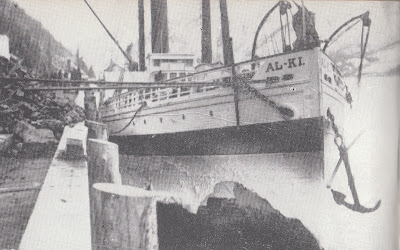 MJ Kirchoff, noted Alaska history author and “Alaska Historian of the year” for 2008 and 1993 has written this excellent review on the subject of the first ship to land in Skagway during the Gold Rush:
“I recently found an August 2, 1897, letter written from Camp Skagway for sale on the internet, and from that posting I made the following discovery. I assumed the letter must have been written by one of the early arrivals from the steamer Queen, as many websites and print sources cite the Queen as being the first vessel to land at Skagway Bay during the Klondike Gold Rush, on July 29th, 1897. As it turns out, the Queen didn’t land on the 29th, nor was she the first. The Queen landed at Skagway Bay on July 26th, and she was preceded in by the steamship Al-Ki.

One of the Queen’s passengers, a Rev. Alfred Kummer, said in an interview on his return to Puget Sound that the Queen landed 200 passengers at Skagway, “who, with the small party left by the Al-Ki, comprised the gold seekers at the place.” (San Francisco Call, Aug 4, 1897). The Al-Ki arriving first is also mentioned by a Queen passenger named Lancelot Pelly, who wrote from Dyea on July 29: “Her [the Al-Ki’s] passengers were not all off the rocks when we arrived.” (San Francisco Call, August 12, 1897)

When I mentioned the Al-Ki coming in first to historian Karl Gurcke of the Klondike National Historical Park, he asked a good question. How did I know that the Al-Ki landed her passengers at Skagway, rather than at Dyea? Well, I don’t, at least not yet, but there is an interesting reference in the July 24, 1897, issue of the Juneau Searchlight that helps shed light on that: “The steamer Al-Ki, Capt. James Patterson, arrived here from Puget Sound ports yesterday noon with a full cargo of merchandise and live stock and the following passengers: . . . For Dyea-H.R. Raymond, Miss Annie Hughes, and twenty-eight second-class. For Skagua Bay-Dr. J. Brown, Fred Banner, C.J. Rowine, Miss K.M. Smith, D.W. Ward, P. Schoock, A.K. Taber, E.M. Ward, T.J. Harris, Robt. Evans, T.B. Carey and seven second-class.” It seems probable that if the Al-Ki had passengers booked for Skagway, she would have landed them at Skagway, particularly when Skagway was an easier port to get into than Dyea.

There’s one more twist to this story.

Even though the Al-Ki beat the Queen into Skagway, she still wasn’t the first steamship to land stampeders there. That honor would probably have to go to one of the small steamers operating from Juneau. When William Moore announced on July 14, 1897, that the trail over White Pass was going to open, Juneauites immediately took notice. On July 17, 1897, the Juneau Searchlight reported: “Several men are busy at work this afternoon loading a scow with lumber and feed for Skaguay. The horses which will arrive on the Topeka will be put on this scow and the steamer Rustler will take it in tow as soon after the arrival of the Topeka, as the passengers can get ready to leave.” Soon thereafter, on July 19, the Rustler did go to Skagway, and by July 24 the Juneau Searchlight reported that there was quite a little crowd at Skagway. George Rice and his wife had arrived with 9 head of horses to be used in a pack train, and there were at least 22 other stampeders on the beach, including a Mrs. Ed Lord, who was proclaimed to be “the first woman ever over the White Pass.”

To summarize then, on July 26, when the Queen arrived at Skagway Bay, Skagway and the White Pass trail was not the wilderness sometimes portrayed. Rice’s horses were already packing, several dozen stampeders from Juneau and Puget Sound were already on the beach (delivered by the Rustler and the Al-Ki), and Moore had close to 20 men employed building his sawmill, planking his wharf, and blasting rocks out along the trail. Skagway was a busy place!

We’re hoping that any other history sleuths out there have some more clues to offer!
Seen above is a scan of the Steamer AL-KI. probably at Skagway.