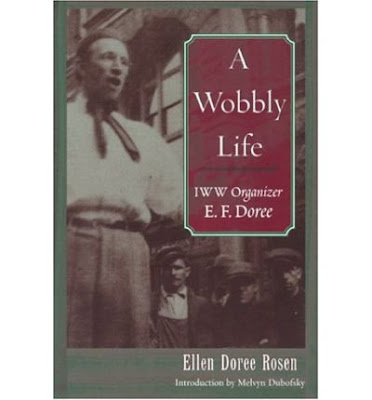 E.F. Doree is quite famous or infamous among union and union-busters. Edward was born in Philadelphia in 1889 to Swedish immigrants Frederick and Maria. The family moved to Coeur d’Alene and from there to Skagway after 1900. Frederick and his son Edward worked for White Pass and lived in company housing. Edward had 5 siblings ranging in age from 3 to 16 – Edward was the oldest. According to his daughter who wrote a book in 2004, here is the story:

One day there was a railroad accident and Edward lost the fingers of one hand. He was fired. His parents requested some compensation from White Pass and instead were told to clear out of White Pass housing, they no longer worked for the railroad.
This created a fire in the heart of Edward Frederick Doree. He moved to Washington and became an organizer for the Industrial Workers of the World more commonly known as the Wobblies. He once mocked the idea of rural work as wholesome and benevolent with the famous joke that in the wheat states, the “eight-hour work day” prevailed—“eight hours in the forenoon, eight hours in the afternoon.”
The IWW fought for the rights of workers—common laborers, migrants, immigrants, black workers—unprotected by the craft unions. In the face of beatings, kidnappings, and lynchings by vigilantes, company detectives, and hired guns, the Wobblies organized in mining and lumber camps, the wheat fields, on docksides and in textile factories. A meteoric career from its beginnings in 1906, the IWW arose with free speech fights, peaked with a membership of over 100,000 workers in 1917, and was devastated in 1918 by the imprisonment of its leadership for violations of wartime legislation.
Doree was a key IWW organizer, union head, writer, and defense committee officer who experienced all of this first-hand. From 1918 to 1922, Doree was one of over a hundred Wobblies imprisoned in Leavenworth Penitentiary when the government cracked down on these activists.
Doree wrote many letters and his writings provide a different view of American labor history. The most interesting irony is that while White Pass saved the money to compensate the Doree family in early 1900’s, by their actions, labor gained a hero. Thousands of companies and millions of workers from that time to present have benefited from the simple rights that unions won for the worker. I will classify Doree as another one of Skagway’s heroes, despite the lack of recognition he has received.