William Britt came to Skagway from Norway in the gold rush and worked as a druggist and was a member of the Arctic Brotherhood and City Council by 1905. He met and married Sophia and they had a son, Jacob William Britt born here in Skagway in 1905 or 1906.

Jacob lived in Alaska until about 1930 and then joined the Navy. He married and moved to San Diego by 1940. By 1942 Lt. Commander Britt was in the South Pacific in command of the Asheville (PG-21)

(The Asheville was built in Charleston N.C. and launched on July 4, 1918. It underwent several overhauls and was known as PG-21.)

On the morning of 1 March 1942, Vice Admiral William A. Glassford, Commander, Southwest Pacific Force (formerly the U.S. Asiatic Fleet) ordered American naval vessels to retire to Australian waters. During World War 2, Lt. Jacob W. Britt was in command of the Asheville (PG-21) when he was ordered to leave Tjilatjap, Java, on 1 March 1942, bound for Fremantle. At 0615 on 2 March, Tulsa sighted a ship, and identified her as Asheville—probably the last time the latter was in sight of friendly forces. During the forenoon watch on 3 March, Asheville radioed “being attacked,” some 300 miles south of Java. The minesweeper Whippoorwill (AM-35), heard the initial distress call and turned toward the reported position some 90 miles away. When a second report specified that the ship was being attacked by a surface vessel, however, Whippoorwill‘s captain, Lt. Comdr. Charles R. Ferriter, reasoning correctly that “any surface vessel that could successfully attack the Asheville would be too much” for his own command, ordered the minesweeper to resume her voyage to Australia.

Asheville, presumed lost, was stricken from the Navy list on 8 May 1942. Not until after World War II, however, did the story of her last battle emerge, when a survivor of heavy cruiser Houston (CA-30), told of meeting, in prison camp, Fireman 1st Class Fred L. Brown, 18 years old, had been in the gunboat’s fireroom when a Japanese surface force (Vice Admiral Kondo Nobutake) had overtaken the ship on 3 March 1942. Destroyers Arashi (Commander Watanabe Yasumasa) and Nowaki (Commander Koga Magatarou) overwhelmed Asheville, scoring hits on her forecastle and bridge; many men topside were dead by the time Brown arrived topside to abandon ship. All 160 men were lost.
A sailor on board one of the enemy destroyers threw out a line, which Brown grasped and was hauled on board. Sadly, Asheville‘s only known survivor perished in a Japanese prisoner-of-war camp on 18 March 1945.

Lt. Commander Britt born in Skagway Alaska was killed in action in the South Pacific on March 3, 1942.

http://toto.lib.unca.edu/findingaids/mss/ashe_walter/default_ashe.html; 1910 census for Skagway; family search. The Asheville is seen above.

Loring and Mary Wilkes came to Skagway from Nebraska  in the gold rush with their little son Mark Edward. Loring worked as a cook but in 1948  wrote: “Packers on the Dyea Trail” in the Alaska Sportsman (June).  His son Mark went to World War One and listed Skagway as his home town.

Mark Edward Wilkes disappeared on this day, November 13, 1918 in France, perhaps near Exermont or Nantillois. Many  officers – Majors Murray Davis and Fred A. Cook, Captains Joseph G. Duncan, Edgar Hayden Dale,  James C. Kenady all died as well as many Lieutanants, Sergeants, Corporals and privates.  Sadly, the Great War in Europe ended on November 11, two days prior to the announcement of the many deaths.

In September and October 1918, the 35th Division was attempting to reach the village of Exermont.  The church and town were nearly destroyed near the Chaudron Farm Road by a counter attack of the German Army on September 29, 1918. Seen above are some of the American soldiers in the church there.  There is a memorial in the town to the fallen soldiers which is perhaps the only marker that Private Wilkes has since he was listed as MIA. Below is the marker in Skagway which does not bear his name. 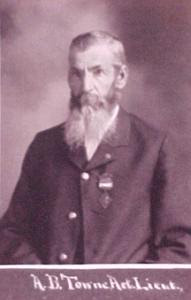 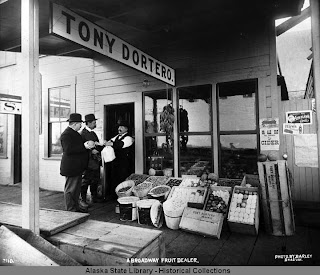