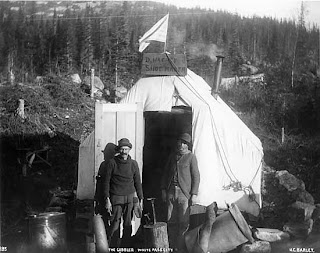 Daniel Hachey was born on May 11, 1849 in Bathurst, New Brunswick.
This photo taken by Barley shows Hachey, a cobbler, standing with a shoe and hammer in his hands next to another man in front of his tent store in White Pass City. If your shoe was coming apart, he would be your new best friend.
Poor Daniel died only three years later, of starvation, in Seattle on June 28, 1902 in Seattle.