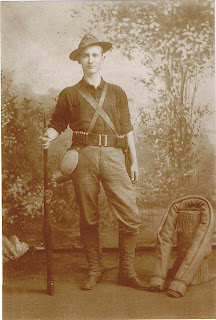 On this day, February 1, 1899, a U.S. Marine died in Skagway. He is buried in the Evergreen Cemetery in Juneau. I can only guess that he was part of the 14th Infantry that had arrived in December 1897.(The main body of the 14th Infantry, companies A, B, G, and H arrived in February 1898 from Fort Vancouver, Washington with orders from the War Department to stay “at least through the coming summer”.)

When the troops first heard of their destination, an air of excitement pervading the barracks. “All were wild to go, and each feared his company might be kept back to man the garrison at Vancouver.” Soldiers leapt into action, rapidly preparing equipment, supplies, and Klondike clothing for the journey. Throughout the Vancouver/Portland area, preparations and goodbyes began as the army prepared to move most of the 14th Infantry north.

Once they arrived, their enthusiasm turned to despair: “Colder than blazes and blowing like thunder described this place from one week’s end to another,” wrote one young soldier the following month. “You never saw a more disgusted set of fellows in your life than our men”.

Politically, the arrival of the troops was meant to cement the U.S. occupation and the boundary with Canada. When Colonel Thomas McArthur Anderson and the troops of the 14th Infantry arrived, they encountered a major of the Canadian Mounted Police – probably Zachary Taylor Wood, with five men and a British flag flying overhead. A potential international conflict began as Anderson ordered the major to remove the flag and move his men to the Canadian boundary, a division determined by the United States. Outnumbered, the flag came down and the Mounties shed their uniforms while in town.

The photo above is of a soldier (Ernest Rue Davidson) in 1899. He was part of the 14th Infantry that went to the Phillipines, so he may or may not have come to Skagway, but it is a good image of the uniform.