Alfred Hulse Brooks was born on July 18, 1871 in Ann Arbor, Michigan and graduated from  Harvard in 1894.  He loved geology and exploring and so, in the gold rush, came to Alaska. He photographed many communities including Skagway – all of the photos are at the Yale Library Collection (which is odd considering he went to rival University, Harvard).

In 1898, the federal government announced a systematic topographic and geologic survey of Alaska that would include renewed exploration of the Brooks Range. Brooks, as new head of the Alaskan branch of the  USGS, called the project “far more important than any previously done,” due in large part because it “furnished the first clue to the geography and geology of the part of Alaska north of the Yukon Basin.” Between 1899 and 1911, six major reconnaissance expeditions traversed the mountain range, mapping its topography and geology and defining the patterns of economic geology so important to prospectors and miners.   He is credited with discovering that the biggest mountain range in Arctic Alaska was separate from the Rocky Mts. The range was named for him – The Brooks Range.

He served as chief geologist for Alaska for the United States Geological Survey until his death in 1924.  Every year from 1904 to 1916 and from 1919 to 1923, Brooks wrote summaries of Alaska’s mineral industries. The missed years, during World War 1 were those that he spent in France as chief geologist for the American Expeditionary Force in France.  He died  on November 22, 1924 and is buried in Washington D.C. at the Oak Hill Cemetery. I love the inscription on his grave:

Loring and Mary Wilkes came to Skagway from Nebraska  in the gold rush with their little son Mark Edward. Loring worked as a cook but in 1948  wrote: “Packers on the Dyea Trail” in the Alaska Sportsman (June).  His son Mark went to World War One and listed Skagway as his home town.

Mark Edward Wilkes disappeared on this day, November 13, 1918 in France, perhaps near Exermont or Nantillois. Many  officers – Majors Murray Davis and Fred A. Cook, Captains Joseph G. Duncan, Edgar Hayden Dale,  James C. Kenady all died as well as many Lieutanants, Sergeants, Corporals and privates.  Sadly, the Great War in Europe ended on November 11, two days prior to the announcement of the many deaths.

In September and October 1918, the 35th Division was attempting to reach the village of Exermont.  The church and town were nearly destroyed near the Chaudron Farm Road by a counter attack of the German Army on September 29, 1918. Seen above are some of the American soldiers in the church there.  There is a memorial in the town to the fallen soldiers which is perhaps the only marker that Private Wilkes has since he was listed as MIA. Below is the marker in Skagway which does not bear his name. 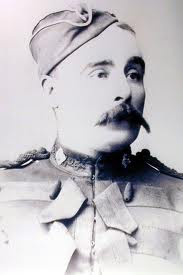 Arthur Murray Jarvis was born on this day, April 6, 1862 in Toronto, Canada.

In 1896, Charcoal, a Blood Indian killed another native man and then went on a shooting spree ending with the deliberate and bloody murder of NWMP Sgt. Wilde Wm. Brock. NWMP Inspector Arthur M. Jarvis followed Charcoal until he was caught and subsequently tried and hung in 1897.
Then, later in 1897, when hundreds of prospectors headed for the Klondike gold fields through Fort Chipewyan and the fur trade river system, Jarvis was sent on a long winter patrol to prevent conflicts. Jarvis was the first Canadian government official to enforce Canadian laws in the Fort Chipewyan region.

In 1898 he was sent to the Dalton Trail Post also known as Pleasant Camp located near Haines. The post was designed to maintain order during the Gold Rush, control the surge of people to the area, and establish a border custom station. Inspector A.M. Jarvis led eighteen North-West Mounted Police from April to October, 1898. Under his supervision, they collected custom fees, captured several criminals, and witnessed the remnants of the U.S. Reindeer Relief Expedition pass through to the Klondike. He established the boundary line on that trail and built a fort at the base of the Chilkat trail there. He was with the NWMP at the spike ceremony in Carcross for the completion of the White Pass & Yukon Route Railroad in 1899.

In January 1900 the Secretary of State for War for Canada accepted the offer of Lord Strathcona to form a unit to go to South Africa for the war. Among those mounted rifle officers was Major A.M. Jarvis. For his valor in battle down there he was awarded the “Companions of the Order of St. Michael and St. George”.
Jarvis retired from the NWMP in 1912 after 31 years of service. In 1915 at the age of 52 he went to England and signed up to serve in World War One in France and Flanders. Jarvis was appointed Lieutenant-Colonel, Assistant Provost Marshal. For his service he received the “Commander of the Order of the British Empire”. Arthur M. Jarvis died in 1930 in Toronto. 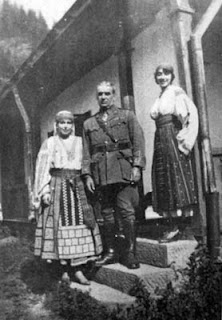