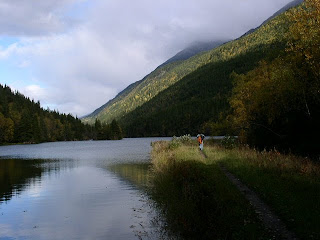 On Sept 14, 1943 Mr. Sturgill died in Skagway, his remains were transported back to Ashland, Kentucky, his findagrave # is 82255919. He was born in Cattlesburg, Kentucky just after the Civil War. Records show that he met his wife in Seattle where they were married in 1897. His wife Miriam or Missouri lived in Skagway for about 30 years. He ran a woodmill on the ocean south of town by bringing a waterway down the mountain from upper Dewey Lake for hydro power. There was remnants of the mill until recently near the creek. There is also remnants of a small rail line still seen on the south side of Dewey Lake. Each summer, hundreds of tourists walk to this point to get out of town. It is a lovely walk through the trees, and at this time of year, the leaves of the cottonwoods are beginning to turn gold.
Sturgill had a number of run-ins with the law over the years. They lived on 7th in town. Missouri Marcom Sturgill left Skagway after the death of Garland and returned to her home town of Cabell, West Virginia until her death on November 19, 1951. She may have had children there from a prior marriage.