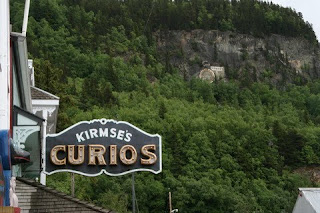 Jack Kirmse, son of Herman Kirmse, born in Skagway in 1906 died on this day, February 10, 1993 in Carlsbad, California, he was 87 years old.
Herman and his first wife Ida Shonknioler moved to Skagway in the gold rush in 1897 and established themselves as jewelers. Ida died of convulsions in 1900 and so Herman married Hazel Cleveland here in Skagway.
Jack and his wife Georgette lived in Skagway for many years. They owned the Moore House on 5th Avenue which had been in the family since 1907 when Ben Moore sold it to Herman. In 1977 Jack sold the house to the National Park Service and it was restored with antique furnishings. The house is open to the public in the summer to view.
Each year the Skagway school awards the “Jack Kirmse Scholarship” to a graduating senior, and in 2003, Arlen McCluskey (see January 20, 2010 blog) was awarded this scholarship which helped him pursue his educational goals.
This coming summer the Kirmse’s shop on the corner of 5th and Broadway will again be open for business by local residents Cara Cosgrove and Bruce Weber who will sell unique Alaskan crafts and jewelery made by local artisans. The totem poles on the south side of the shop and the clock face on the mountainside are popular for tourists to photograph.

In the picture above you can see both the shop sign and the sign painted on the rocks above town advertising Kirmse’s. The clock face on the clock shows the time of 7:20 which some have said is the time of Lincoln’s death, but actually it has another meaning: in the U.S. clockmakers will set the face of the clocks they are showing in the shop to 7:20 to show the symmetry of the clock face. A Swiss jeweler told me that in Europe they set their clocks to 10:10, the difference being that it makes a smile instead of a sad mouth – a “sourir” I think she said.