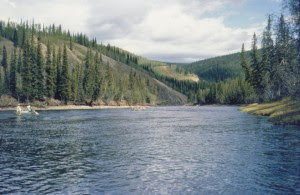 Although little is known of Tom William, one thing is sure, he died on this day, February 12, in 1887 in Dyea.
The circumstances of his death are extremely important to history. Tom was a mail carrier who, while crossing the Chilkoot Summit nearly froze to death on the mountain. “Indian Bob” helped carry him down to the Healy trading post in Dyea where Tom told a fantastic story of gold being discovered and that a fellow traveler Leslie had poisoned and shot his partners – perhaps to keep the location a secret.
Pierre Berton said that Tom had nuggets of gold on him, but died before he could give the exact location-but that it was near 40-Mile River in British Columbia, seen above. After that, stories persisted of gold in the Yukon and eventually sparked the gold rush of 1897-98.
Who knows, perhaps there is still a place in the north where gold nuggets lie on the sides of a stream. I’m thinking I might do a little more camping this summer…..

One Reply to “Tom Williams”