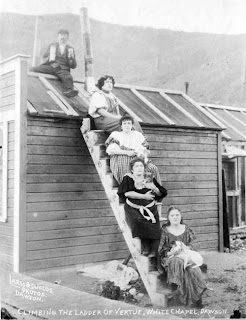 Mr. Larss, or Larson as he later was known, was a famous photographer of the Gold Rush. He was born on this day, February 16, 1863 in Sweden. He worked with another photographer, Joseph E. N. Duclos here in the north from 1899 until 1904. Duclos continued working in Alaska and died in Alaska of pneumonia after surgery in 1917. Their many photos are seen at the Alaska Archives under “Larss and Duclos” or incorrectly as “Larss and Duglos.” Above is a cute one of naughty ladies on a ladder in Dawson.
Larss left Alaska and the Yukon in 1904 and eventually went back to California where he died in 1941 in San Pedro.