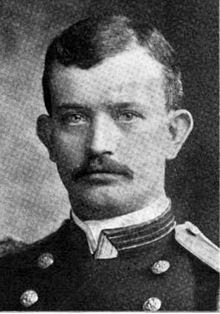 Governor Hoggatt was born in 1865 in Paoli Indiana. Maybe his parents thought that giving him a name that brings up visions of a pig would make people smile. He graduated from the United States Naval Academy in 1884 and remained in the Navy for 18 years, including service during the Spanish-American War.
Hoggatt was a member of the Arctic Brotherhood and became Governor of Alaska from 1906 to 1909. During his term Hoggatt was responsible for relocating Alaska’s government from Sitka to Juneau, where it has remained ever since. In 1925 he moved to New York City, where he lived in retirement.

He died on this day, November 26, 1938 in the Bronx, New York. I am tempted to say he choked on a ham sandwich, but no, just complications of old age.