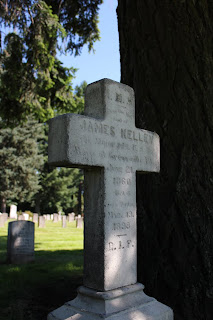 Sgt. Major James Kelley married his sweetheart at the beginning of March 1898 in Vancouver Washington. He shipped out one week later and arrived in Dyea in March 1898. He was in charge of the 14th Infantry and as they were setting up the camp, he suddenly cried out in pain. He was struck with spinal meningitis and died on this day, March 19, 1898. His body was shipped back to Vancouver Washington and a large stone marker sits on his grave in the military cemetery there. Oddly, cemetery records show a dependent, an infant named James Kelley also buried in the same plot in March 1898. Although this could be a mistake, it paints an odd picture.