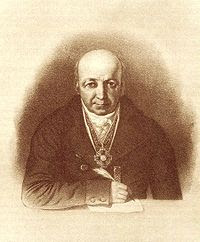 Happy Birthday to Alexander Baranof born April 16. 1747 in Kargopol, in St. Petersburg Governorate of the Russian Empire. Alexander ran away from home at the age of fifteen. He became a successful merchant in Irkutsk, Siberia. He was the Chief Manager of the Russian-American Company, headquartered in Sitka, serving as Alaska’s first Russian Governor from 1790 until his forced retirement in 1818. Although he never came to Skagway, he should have!