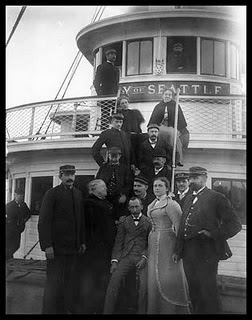 Captain George was known as the “father of Alaska pilots”. He was born on this day, April 23, 1834 in London England.
Capt W.E. George sold the ship Alpha and was employed by the Pacific Coast Steamship Company, of San Francisco, operating the State of California, the Ancon, the Idaho and other famous vessels of the early steam-boating days, north from Portland, Oregon. In 1897 he joined the steamer City of Seattle at the time of the Klondike rush, operating on the Skagway run for Dodwell & Company. Captain W.E.George, skipper of the excursion steamer Idaho, one night in 1883, made an error. Confidently, he sailed up a long, sheltered inlet that offered an attractive shortcut to Sitka, only to run aground in the shallows that blocked the head of the inlet. The inlet retains the name of Idaho, recalling for posterity the captain’s misfortune.
His son, Frederick T. was a sailor on the Alki, when in 1902 fell off of the Moore’s Wharf and drowned. Frederick was only 27 and is buried in the Gold Rush Cemetery.
Captain George died in Vancouver in 1922 and is buried in Victoria. the photo above shows a captain on the vessel “City of Seattle” and it may be Capt. George

from the Skagway Death Records and a family rootsweb posting.